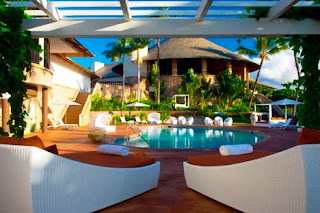 Pool Bar: The newly renovated pool bar/lounge now offers beer and wine along with a specially crafted menu from the hotel’s award-winning restaurant Capische?.  Highlights include Hawaiian Pizza with Prosciutto d’Parma and Grilled Sicilian Spice Ahi Sandwich.
New gym and spa: Hotel Wailea’s gym offers panoramic views of the while exercising and free yoga classes are also available here.  Massage therapies such as the Pohaku Facial (facial massage using warmed Hawaiian stones) and the Lomi Lomi Massage (traditional Hawaiian massage using long forearm strokes) are offered at the renovated spa facility.
“The Weekend Lounge” on Fridays and Saturdays: 5-8 PM features organic martinis and live music/ DJs .
“In-Room Picnic” menu: Guests can dine on a casual meal in the privacy of their suite, in the gardens, or on the beach with “to-go” style picnic meals. Items include pizza, pasta, and salads. Lunch is available from noon to 4 PM and dinner from 5:30 to 9 PM.
An excellent place to spend a Maui vacation, the all-suite Hotel Wailea is an intimate retreat situated on a tropical 15-acre site in exclusive Wailea Resort on ’s southwest coast.
Each of the 72 suites offers spacious 900-square feet of living space which includes a bedroom, sitting area, kitchenette and private lanai with deluxe ocean views and/or garden vistas. 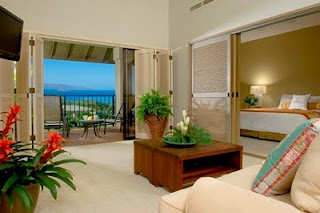 The resort features a nearby beach area with exclusive attendant services and easy access to Wailea’s Blue, Gold and Emerald golf courses, the exclusive Shops at Wailea, and a world-class tennis facility.
Hotel Wailea is managed by Aqua Hotels & Resorts.  For more information, visit www.hotelwaileamaui.com.

Posted by Sandi Yara at 7:38 PM No comments:

A ‘taste of Spain’ at Honolulu Academy of Arts, July 30 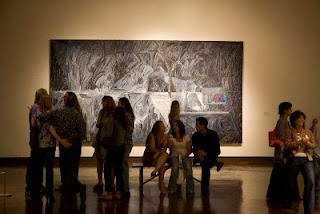 The popular ARTafterDARK series of pau hana events at the Honolulu Academy of Arts will focus on Spanish art, food, music and fun on Friday, July 30.
Price is $10 … or free for Academy members
Time … 6 – 9 pm
The Iberian experience starts with Charito Rivera, Andrell McCray and Tui Petelo performing flamenco, the bolero, paso doble and other dances. Meanwhile, DJ Kevin Tsuji transforms the Luce Pavilion Courtyard into an nightclub with a trance set, and chanteuse Aña Monique will belt out Latin tunes. 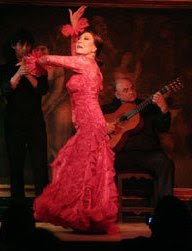 Twn restaurant will set up a tapas bar serving small plates of Spanish classics and Downtown will pour sangria.
Guests can take part in a gallery hunt that focuses on the world of Picasso and all ground-floor galleries will be open to the public. People who turn in their hunt sheets have a chance to win ARTafterDARK passes and food-and-drink tokens. New exhibitions are As It Happened: Works by Sanit Khewhok and Interior Landscapes: The Art of the Chinese Snuff Bottle.
For more info, call 532-8700 or visit www.aftafterdark.org
Posted by Sandi Yara at 12:50 PM No comments:

Affordable way to dine in Hawaii (photo gallery)
Posted by Sandi Yara at 7:19 PM No comments: 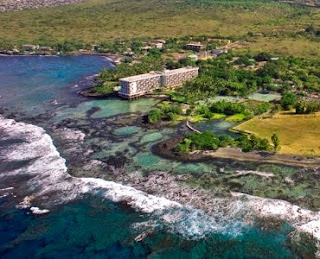 The mangos have arrived!  Summer equals mango madness, and this year, this exotic, luscious, juicy and sweet fruit is again the center of attention on Saturday, July 31, at the Hawaii Healing Garden Mango Festival held on the grounds of Keauhou Beach Resort, on ’s .  Starting from 10am through 5pm, mango aficionados will be able to peel, cut or bite their way into more than 20 varieties of the most widely produced and consumed fruit in the world.
Presented by HawaiiHealthGuide.com and The Sanctuary of Mana K’ea Gardens, the Mango Festival celebrates all things mango with a day filled with special events and activities including live music, hula and cultural performances, mango culinary arts, a mango recipe contest, and cooking demonstrations.  An outdoor expo will feature Green Healthy Living with natural products, medicinal plants, arts & crafts, massage, health and wellness practitioners, children’s activities, healthy foods, and organic farm produce including coffee, taro and of course, mangos. For a complete list of scheduled events and activities, visit www.HawaiiHealingGarden.com.
With rates ready for picking, mango lovers are invited to explore Keauhou Beach Resort, and take advantage of their ripe kamaaina offer starting at just $109 per night, complete with complimentary breakfast buffet.  For reservations or information, call toll free 1-866-326-6803 or the hotel direct at 1-808-324-2515.
Mauna Lani Vacation Rentals (Big ) 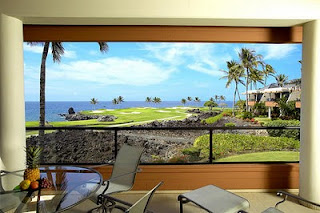 Foodies in the family? Cooking show fans? Then the food scene and the gourmet kitchen in your vacation rental will add delicious pleasures to your next stay.
Only with a fully furnished vacation rental can you take advantage of the farmers markets and tempting roadside stands. If you haven't been back to Mauna Lani in a few years you'll discover new specialty food markets with fresh local ingredients and chef prepared ready-to-eat meals within our resort and at others close by.
Daily maid service, concierge and other resort amenities give you the security and convenience of a resort hotel yet with all the comforts of home. And No Resort Fees. What a relief!
Choose the luxury vacation rental that fits your unique lifestyle:
For more information or reservations, call 1-888-364-7189
Kaanapali Alii (Maui) 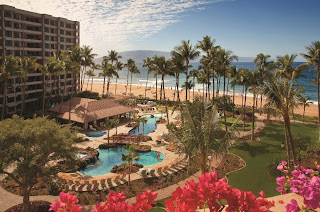 Memo to gym members, tennis players and all who would like to try out a healthier lifestyle:  The luxurious ocean front Kaanapali Alii announces the new Alii Athletic Club.  Use of all Club amenities is unlimited and free for guests – and there are no resort fee.


The Alii Athletic Club includes a new state-of-the-art fitness center, a serene yoga studio/stretching area, spa treatment rooms offering sports and other massage, and just adjacent, a three-court tennis park with an on-site tennis pro & lighted courts available from 8 a.m.- 9 p.m.
Stay Longer and Save
Stay 4 nights at Kaanapali Alii and receive your 5th night free plus receive a $200 gift card to enjoy during your stay or when you return home.  Stay 10 nights and receive your 5th & 10th nights free and a $400 gift card.  Offer valid in select categories now through December 20, 2010.  Reserve Now!
Posted by Sandi Yara at 4:03 PM No comments:

Located in Waipahu, Restaurant Kuni has started to offer mini-lunch specials starting at $5.75 for one choice, $9.75 for two choices and $13.75 for three choices ... such a deal ... and for a decent amount of food.  Regular one, two and three-choice meals are also available.  Here are the choices: 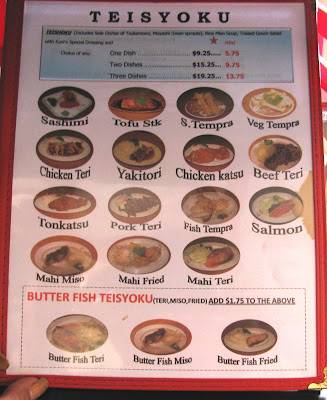 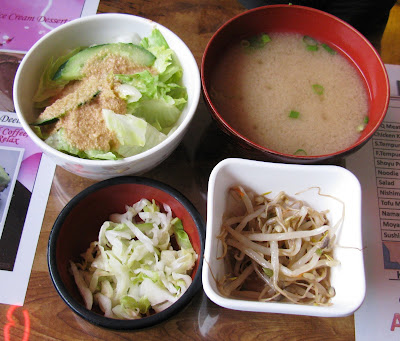 Here is what the 'mini' two-choice teri-beef and tempura looked like ... 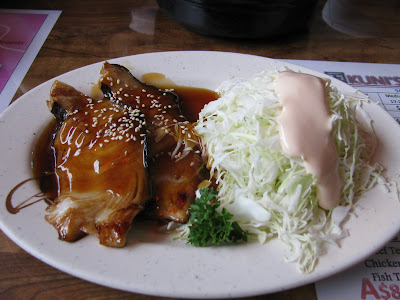 And here is the excellent 'small' Kuni Special Saimin that is $6.50 and also comes with salad, tsukemono and bean spouts. The large is just $8.50.  The small 'regular' saimin is just $3.50!! 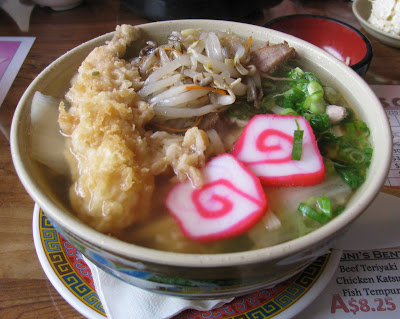 These are clearly the 'best' prices I've found so far for good, Japanese-style lumches.  The mini one-choice would be perfect for kids and grandparents.

Restaurant Kuni offers a selection of ice cream desserts and is also open for dinner.  There is a bar attached to the restaurant that does pretty good business during pau hana on Fridays so dinner during this time can be noisy and parking challenging.
Posted by Sandi Yara at 10:06 PM 1 comment:

Hawaiian Airlines – Spreading its wings across the Pacific

Hawaiian Airlines – Spreading its wings across the Pacific
Posted by Sandi Yara at 10:36 AM No comments: 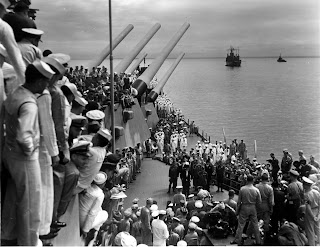 The WWII Pearl Harbor & USS Missouri 65th Anniversary Package includes three-night deluxe room accommodations for two, deluxe roundtrip motor coach transportation to and from the hotel, a keepsake replica of the Surrender Card that was given to each sailor aboard the Battleship Missouri, and a historical tour.
The tour hours are from 6:55 a.m. – 2:45 p.m. Tour details include:
o         USS Arizona Memorial and Visitor Center – Guests can experience and pay their respects with a viewing of a documentary film and official Navy Tour aboard the USS Arizona Memorial, one of nine U.S. sites that are part of the World War II Valor in Pacific National Monument. It is the final resting place for many of the ship’s crewmen who lost their lives during the Japanese bombing at on December 7, 1941.
o         Driving tour of the National Memorial Cemetery of the Pacific (also known as “Punchbowl”) and Historical Downtown Honolulu, including Kawaiaha‘o Church, King Kamehameha Statue, ‘Iolani Palace, State Capitol, Honolulu Hale, and Mission Houses Museum. 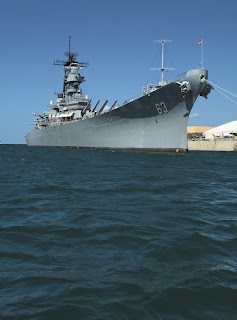 ship nicknamed, “” which includes a choice from
one of the following tours:
o         Mighty Mo Tour (35-minute guided tour)
o         Guide2Go iPod Tour (audio-visual tour using the Apple “iPod touch” corresponding to ship signage)
o        Acoustiguide Tour (audio-only tour also
corresponding to signage)
o         The option to tour the Battleship at one’s own
pace along a variety of self-guided tour routes
The date September 2, 1945 marked the end of the war, with the official signing of the Instrument of Surrender by the Japanese government
aboard the USS Battleship Missouri. “Mighty Mo” resides in
, after being decommissioned and donated to the USS Missouri Memorial Association.
The package is valid through December 25, 2010. Based on availability, restrictions and blackout dates may apply. Must quote promotional code I26 when booking package to receive offer. A minimum three-night stay is required. Additional charge of $37.00 per child. Rate cannot be combined with any other rate plan or package.
For reservations or more information about the WWII Pearl Harbor & USS Missouri 65th Anniversary Package, visit marriottwaikiki.com.

Posted by Sandi Yara at 3:52 PM No comments: